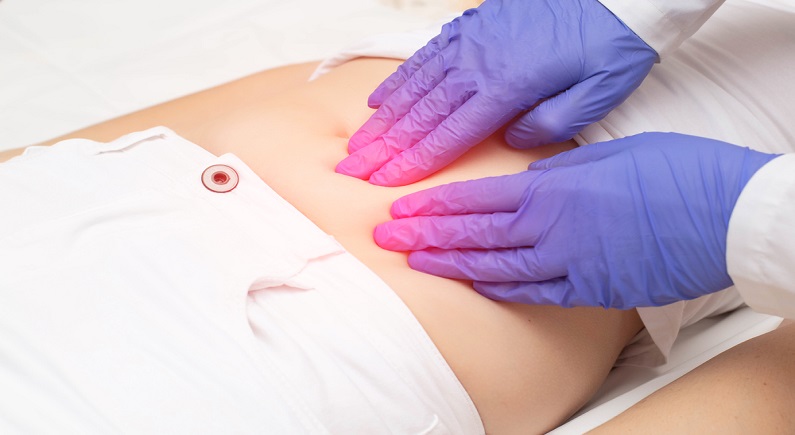 If you’re having abdominal pain or prolonged, intense discomfort that doesn’t seem quite normal, it’s possible you have an ovarian cyst. These small fluid- or tissue-filled pouches on or in your ovaries are actually very common. Here are the signs you might have an ovarian cyst and what you should do if you have one according to our experts.
Common ovarian cyst signs
Your ovary normally produces an ovarian cyst with ovulation. When a pregnancy does not occur after ovulation, the ovarian cyst shrinks and goes away. Some people may experience mild pain that lasts one to two days associated with ovulation.
Beyond ovulation, endometriosis, and the abnormal reproduction of cells, a pelvic infection like pelvic inflammatory disease (PID) can also cause ovarian cysts.
Ovarian cysts are usually small enough that most people with ovaries don’t even realize they have one. In fact, many cysts are diagnosed incidentally during annual pelvic exams or imaging tests that are performed for another reason. Even cysts that become enlarged often go unnoticed.
However, if a cyst gets big enough, it may create a feeling of pressure or even pain

What does an ovarian cyst feel like?
Most ovarian cysts go away on their own, but if you’re feeling bloated for long periods, this could be a sign you have an ovarian cyst that’s growing. You may also feel a dull aching pain on one side of your lower abdomen, your lower back or your pelvis. Other signs you may have an ovarian cyst include:
• Pain with sexual intercourse.
• Changes in bowel movements or urinary habits.
• Unanticipated weight loss or gain.
• Feeling full too quickly when you eat.
• Painful periods.
• Increased urination.
These symptoms can be easy to ignore, and one by itself may not be concerning. But if you’re noticing many of these together, that’s a good reason to see your doctor for an evaluation.

A cyst that bleeds, bursts, or causes your ovary to twist on itself (a condition called ovarian torsion) can cause a sudden rise in the severity of pain. Other signs you may have a burst ovarian cyst include:

Do the symptoms vary based on the type of cyst?
In most cases, symptoms remain largely the same. But the kind of cysts that can develop in your ovaries are wide-ranging and include the following:

Functional cysts. This is the most common kind of cyst, occurring as part of the normal menstrual cycle due to ovulation. Occasionally, a functional cyst may fill up with blood, making it swell and cause pain, but they’re normally painless and generally go away on their own over the course of a few weeks.
Dermoid cysts or teratomas. You’re often born with this type of cyst. It can be full of all kinds of things that the body grows, like hair, teeth and even thyroid and brain tissue. Very rarely, teratomas may become cancerous.
Cystadenomas. A cystadenoma can get quite large, measuring up to a foot or more in diameter. It’s like a mole in that it’s usually a normal, benign growth. And like a mole, sometimes we need to remove these to make sure they’re not cancerous
Endometriomas. “These cysts develop from endometriosis (a condition in which your cells from your uterine lining grow outside of your uterus) and they can be very tender and painful.
Cancerous cysts. Fortunately, ovarian cancer is rare. There’s a lifetime risk of about 1-1/2%. If you have a first-degree family member with ovarian cancer, this risk increases to 5%. People who have certain genetic conditions like breast cancer genes or Lynch syndrome also need to be more concerned if they develop a cyst.

What to do if you have a cyst?
If your doctor finds an ovarian cyst, you’ll most likely have a pelvic ultrasound to see what’s going on, and treatment will depend on your situation. In most cases, it may be best to closely monitor it.
Depending on the appearance of the cyst, many times, we’ll wait six to eight weeks to see if it goes away on its own. A lot of cysts look just like a water balloons. There’s nothing worrisome inside them and they can be present even after menopause. It’s very reasonable just to watch these with a sonography every year to make sure they’re not growing.
Occasionally, a cyst needs to be surgically removed. There are a few things we look at in a cyst to evaluate whether or not it needs to be removed. If it’s causing painful symptoms, we may want to remove it for comfort reasons or out of concern for cancer.

You may also need surgery if the cyst is very large or if it looks abnormal on the ultrasound. If, for instance, the cyst has extra solid tissue growing inside it, we’ll usually get tumor marker blood tests. The most common one is cancer antigen 125 (CA125). Elevated levels make us more concerned about cancer, especially after menopause.

When to see a doctor?
If you experience intense pelvic pain, especially if it happens quickly, you need to get help immediately. Since a twisted ovary can reduce or stop blood flow, the sooner you get medical attention, the better chance there is for your ovary to be saved.
For general pelvic pain, There can be a lot of causes, and sometimes they can be difficult to differentiate. In these cases, it’s best to go see your doctor see if they can determine the cause of your pain because sometimes it may be serious.
To know more talk to our experts: https://onphospitals.com/gynecology